Last week we were given a guided tour around a nature reserve on Portland ....

It was lovely to see all the wild flowers, especially when they were growing in a hostile environment, amongst the rocky landscape seen below. 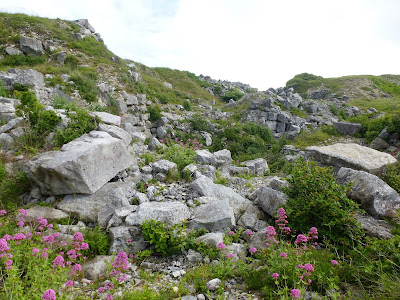 This is King Barrow Quarry,a disused quarry on the Isle of Portland. This island is famous for it's limestone. The island is 6 km long by 2.7 km wide. The causeway permanently links it to the Dorset coastline at Weymouth. Once there was over 100 quarries on the island, six are still operating today. The stone has been used over the centuries in the construction or facing of many public buildings in London, including St Paul's Cathedral,Whitehall, the Cenotaph and Trafalgar Square. After the Second World War Portland stone was widely used in those towns and cities that had been badly damaged e.g. Plymouth, Bristol and Coventry. It was also used in all the Commonwealth grave stones.

Historically the stone would have been extracted using hand tools - see this old  British Pathe film ,which shows the methods used. The pieces of rock that weren't required were left strewn over the landscape. Dorset Wildlife Trust have given nature a helping hand - invasive plants such as cotoneaster have been removed by hand and the wild flowers have been nurtured and encouraged to spread. On the site we also found bee and pyramid orchids and the remains of a fossil tree (the images of which were difficult to capture, we had several heavy downpours!) 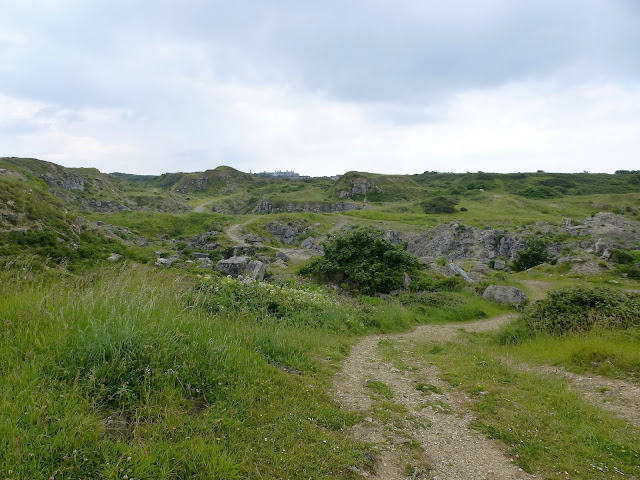 The modern day mining next door to King Barrow looks so different. However the mining companies  are now working with the Wildlife Trust to ensure that the best outcome is achieved when the mine is no longer operational. 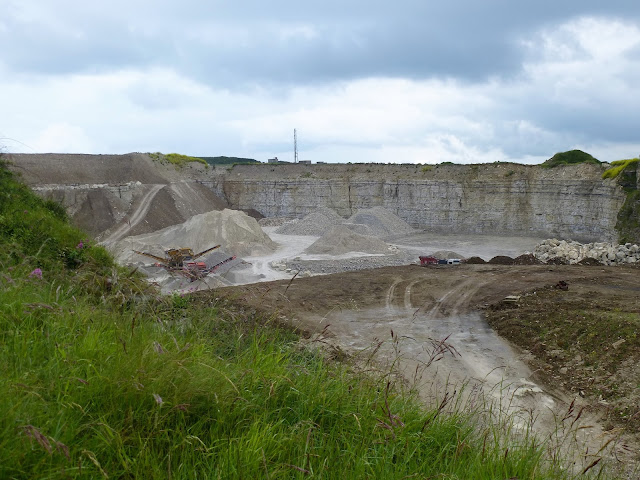 The remains of another quarry on the other side of the reserve, had previously been used as a landfill tip, the metal poles allowing the escape of methane gas. 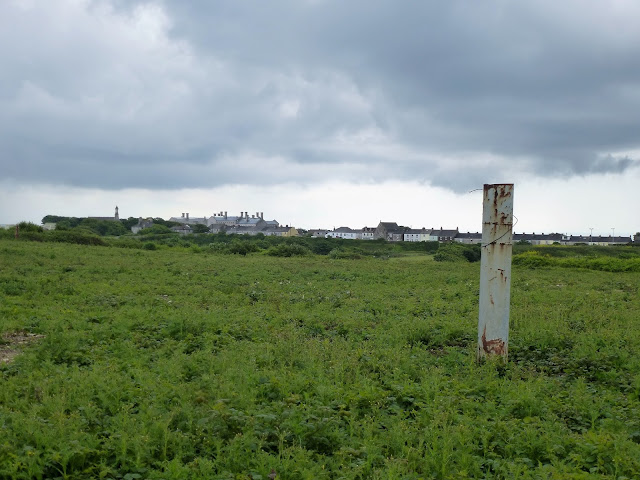 The landscape around Dartmoor in Devon, also shows remnants of past generations - from bronze age huts and circles to old mine workings. The area around Tavistock, in particular, was industrial with tin,copper,iron and arsenic being mined. 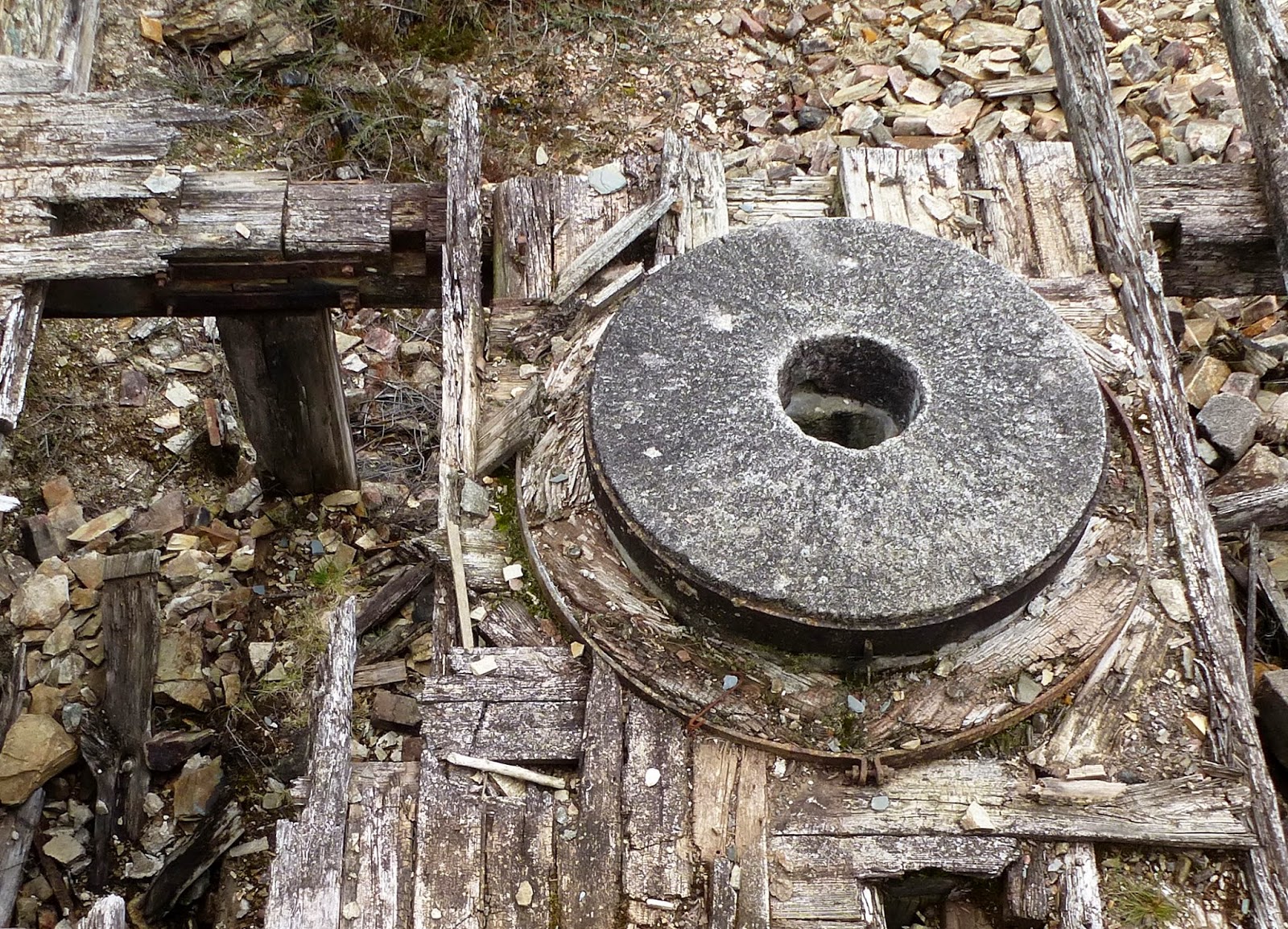 It was only after we had been visiting this area for a number of years, that we discovered my husband's ancestors had lived and worked here.With the help of national lottery funding, a wide range of walks and cycle paths have opened up. Last year we took one of these walks through the woods and ended up at the great console, which was a series of mines. 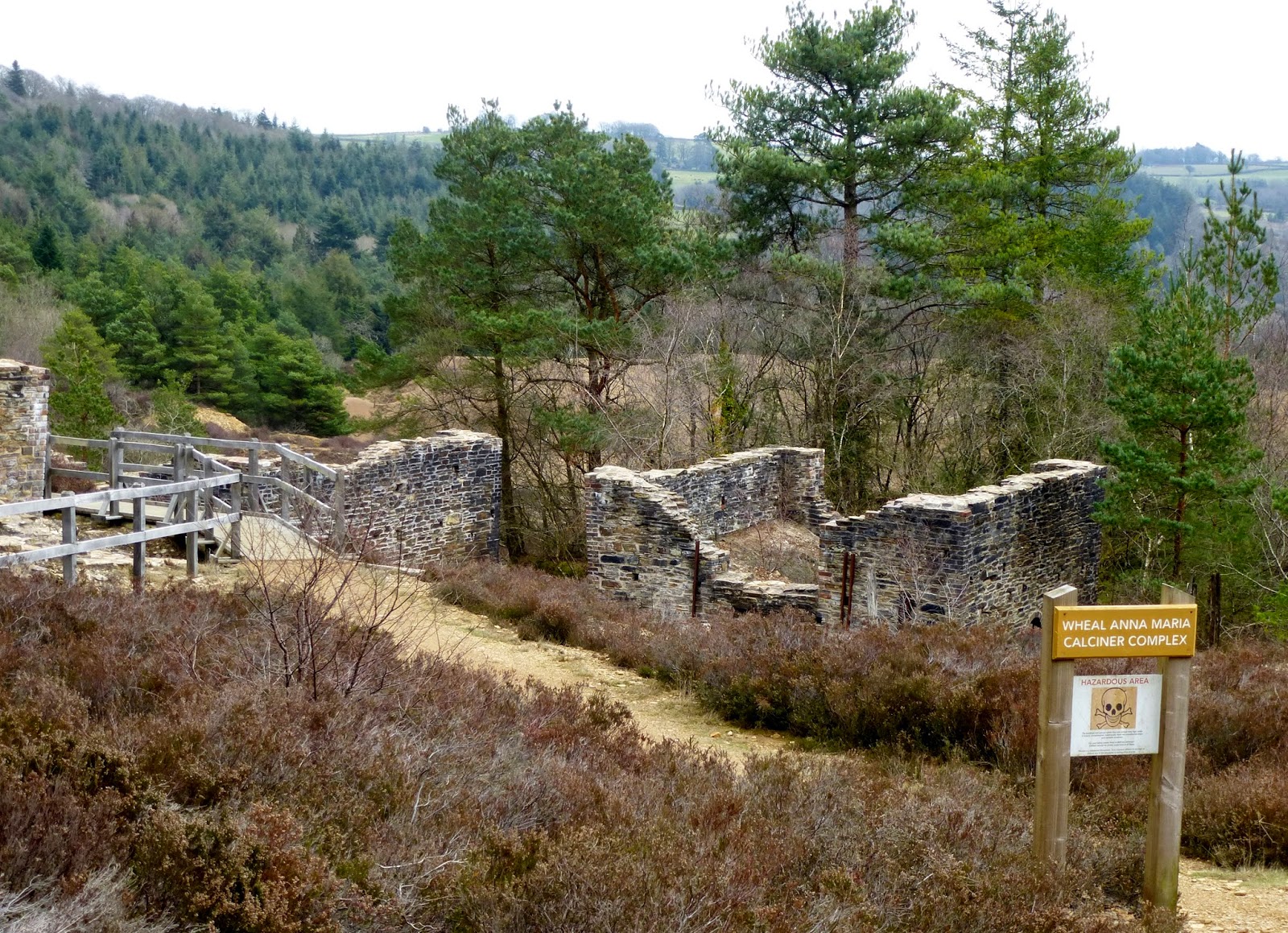 There was a huge mountain of arsenic waste, which was all fenced off, a look out area with signs warning everyone to keep to the paths. To my surprise, on one of the noticeboards I discovered a picture of William Morris, who was well-known for setting up the Arts and Craft movement and who was against industrialisation. His family had owned one of the mines here and he had been given some shares and for a period of time sat on the board of the mine. 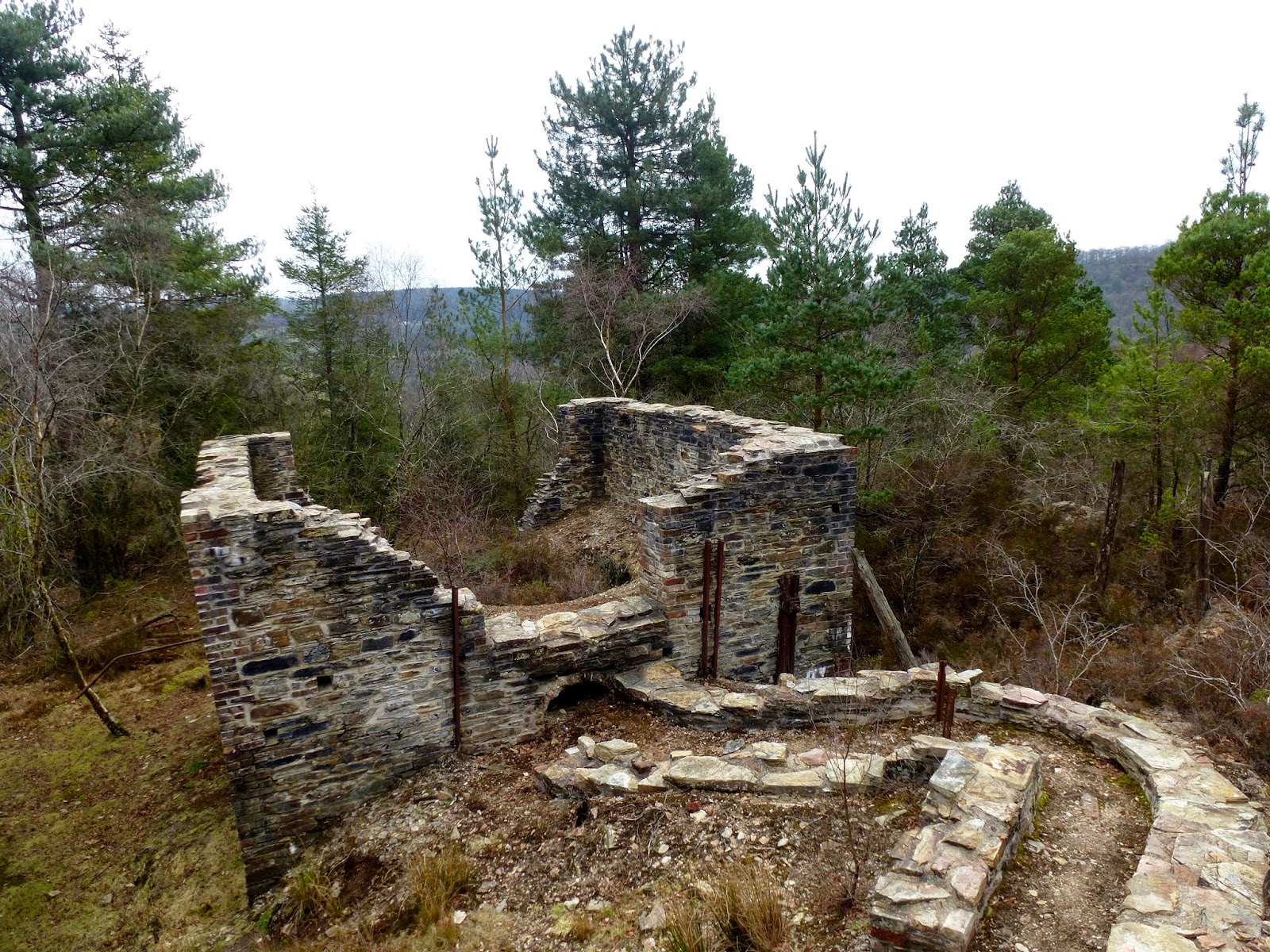 This part of his life seemed such a contrast to the beautiful flowers and patterns he created. I was intrigued by this, and carried out more research once I had returned home. He has always been a bit of a hero of mine, with his philosophy of a simple life and his words of "only have what you believe to be beautiful or useful in your home " have been a manta of mine for many years. It seems that the wallpapers he created used arsenic to create the green colours, This resulted in some people contracting arsenic poisoning with fatal results..

When the mines finally shut down here, the land was planted with pine trees to help prevent soil erosion and it is now a haven of wildlife. 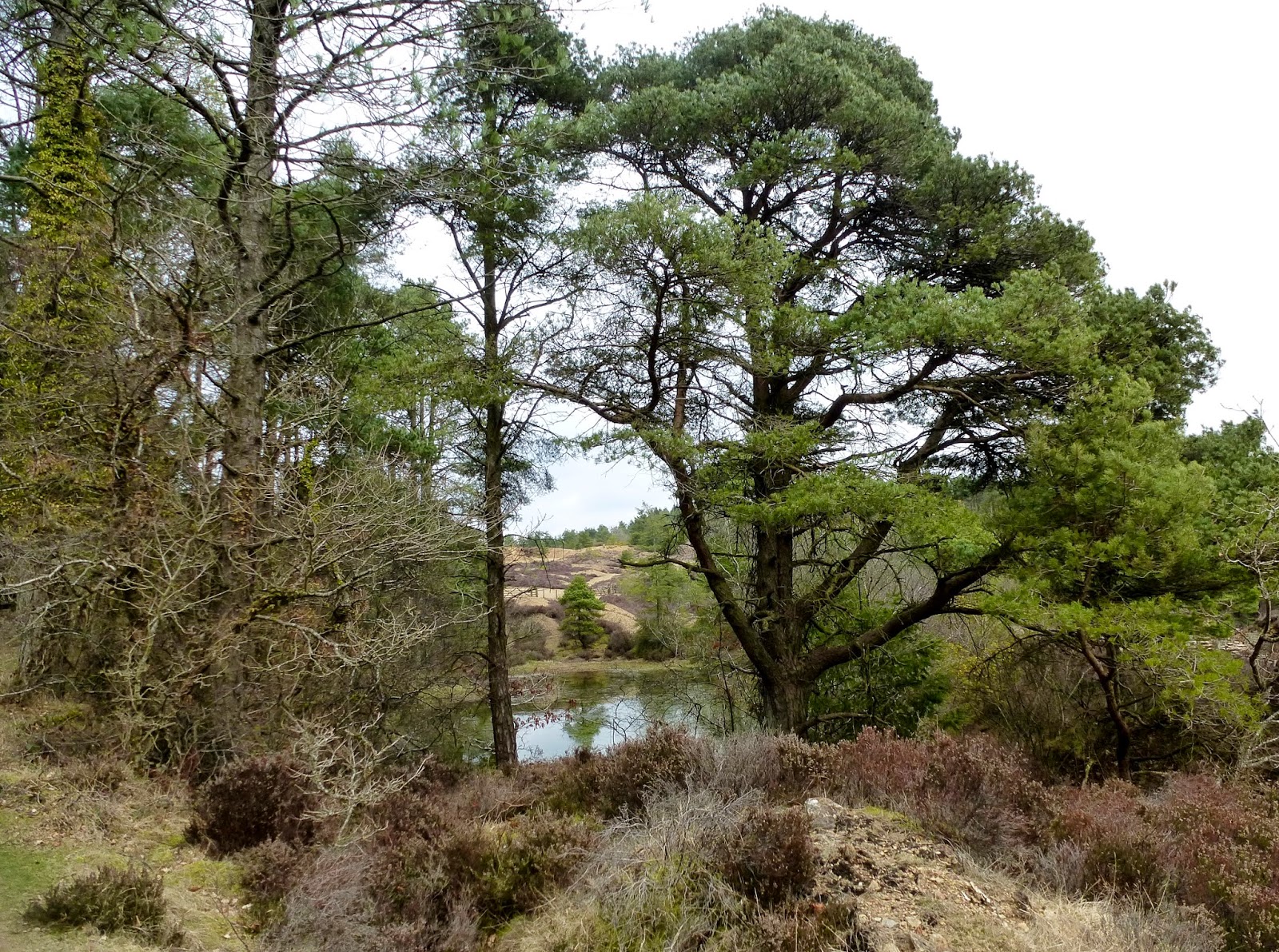 Do you have any past industrial landscapes on your doorstep that have returned to nature ? I would love to hear about them.