I love dreaming of staying in quirky or unusual places and included in my list is beach huts, house boats, gyspy caravans, and old railway carriages.

I first saw this railway carriage to rent many years ago with Under the Thatch and it sparked my initial interest in them. What a fantastic location on the Welsh coast! It used to be so popular that it was fully booked up for at least a year in advance.


Going to the seaside either on holiday or on a day trip became popular in the Victorian era, partly as with the growth of the railways the seaside was more accessible. At the beginning of the 20th century the Brighton Railway company sold off some railway carriages for £10 and these were purchased and see this picture here of how one was taken to its final location close to the beach. They became some of the first beach chalets!
When soldiers returned from the First World War there was a national shortage of housing and at the same time small railway companies were amalgamated resulting in a surplus of railway carriages. These carriages provided desperately needed accommodation.  Land was cheap and there were no planning laws and so many of the carriages ended up in locations close to the sea. This  link shows a postcard  of the bedroom of one of these carriages in the 1920's. Buying two or more railway carriages and building a bungalow around them was a cheap way of having a home.

There are still over 5,000 railway carriages in use in Britain and it is thought that at least 400 of these are over 100 years old. Here is a sample of a few that you can stay in (not all of them are Victorian) - this first one being in West Dorset close to the sea - click on the links below the captions for more pictures and details. 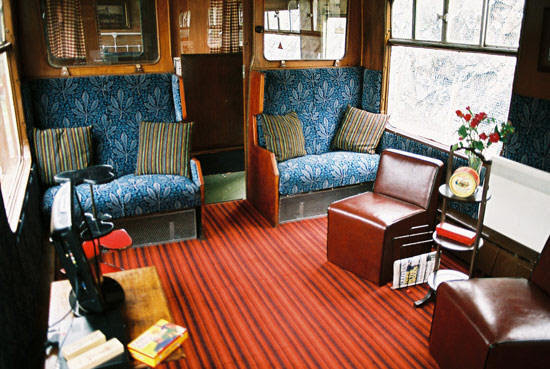 Are you aware of any converted railway carriages where you live? Have you ever stayed anywhere unusual? If you have I would love to hear about it. We have stayed in a converted pig sty and also a sheep barn - I'll leave those for another time!

Congratulations to the winner of " The wonderful weekend book by Elspeth Thompson" - the  lucky winner selector from the random number selector was  Freda from live simply-simply live. I hope you will enjoy it as much as I have. If you  all haven't had enough of railway carriages Elspeth's blog describes the journey of renovating her two Victorian railway carriages.

Welcome to my new follower Fran from Bonnie of Clyde she is renovating a barge and appeared as a new follower after I had written this post and before I had posted it, how's that for timing!


I'm now off to carry on dreaming of a holiday in one of these carriages!

Postscript -my dream came true almost a year later we stayed a weeks holiday in a railway carriage and it was better than I dreamed off - see here.

New comments are not allowed.