On the high seas

On a cold wet winter's day in December 1863, a three master sailing ship called the Monarch sailed into Bristol docks. On her deck Captain John Way was staring anxiously out at the houses on the quayside. As he drew opposite his house, he shouted loudly. Almost immediately the window opened and a strange woman appeared holding a baby in her arms. She informed him that his wife and 3 day old son were both doing fine. That sea captain was my great great grandfather, so it is no surprise that the love of the sea is in my blood although I'm afraid I don't share his sea legs.That has passed through to other members of the family!


This story was retold in my Great Uncle's biography and this is another thing that led me to research and find out more about the history of my family.

My Great Uncle always remembered his grandmother telling him this story, because there was a painting of the "Monarch" hanging on the wall. When I was a child my Mother had a postcard showing this picture. I used to look at it and wonder what journeys it had undertaken and where in the world it had visited........ 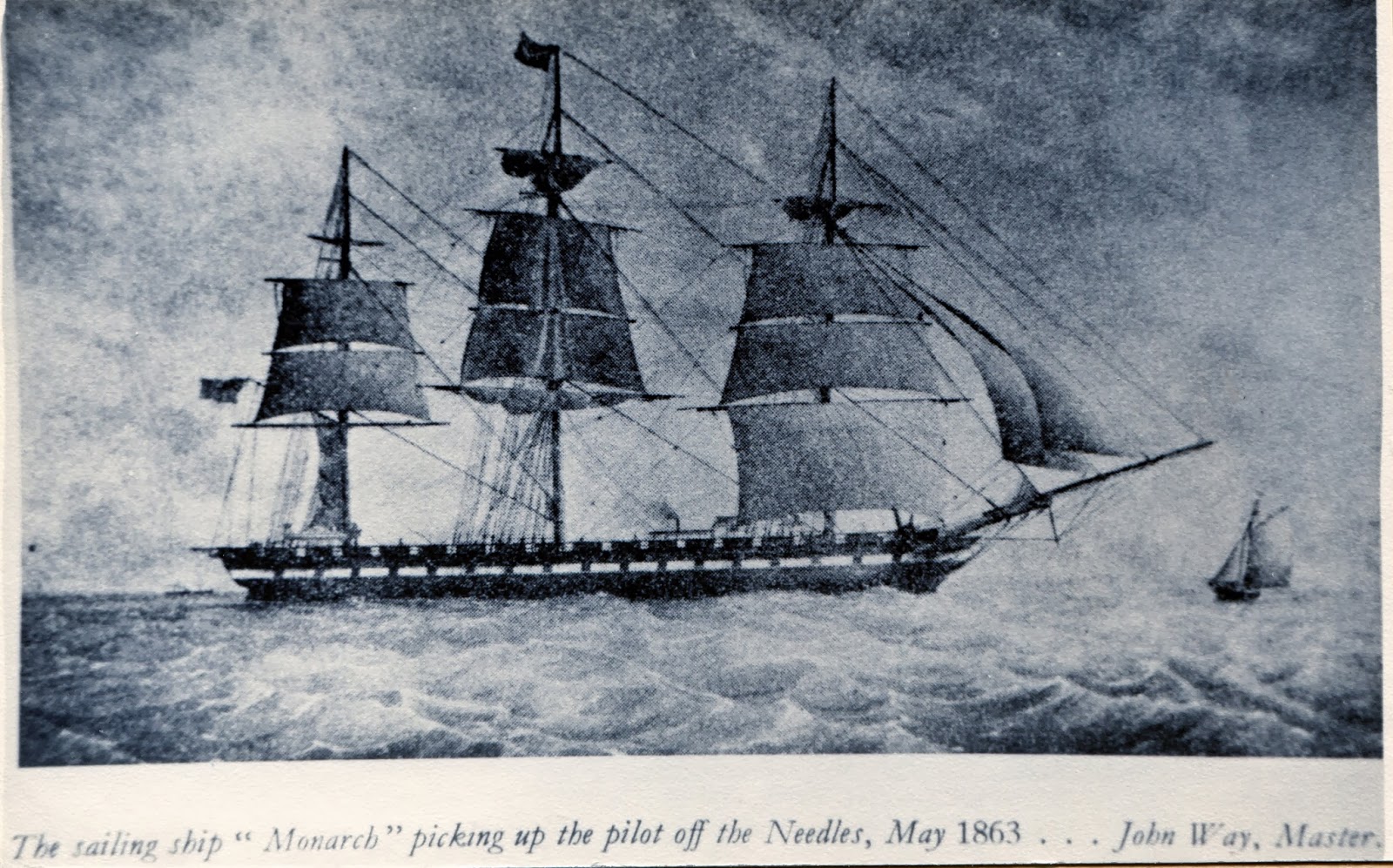 With the help of the internet I have been able to find answers to that wondering! Over the centuries Monarch has been a popular name for ships! This Monarch ship above was a frigate ship built in 1844 and launched from the Greens shipyard at Blackwall on the River Thames.  There is a wonderful article I discovered on the British newspaper archive site describing the scene. Three boats were launched in one day and the quay side was heavily populated with many coming out to enjoy the party atmosphere and see this spectacle. Ships and boats in the harbour were decorated with flags and bunting.

The Monarch was used on the Australian trade for many years, and I have found evidence on her in berth in Sydney.Adelaide and Melbourne. The transportation of convicts from England ceased around 1850, and she was a passenger ship used to transport goods and immigrants.The accommodation in all classes was deemed to be quite spacious. She seemed to have been a popular boat and her first class accommodation was well favoured by a number of colonists. The price for a second class cabin was equivalent to  £10,000 and for a third class £7,000. Stewards were used to serve food to the first and second class passengers. There was even a miking cow kept on deck to provide fresh milk.


One of the articles I discovered in the Australian newspaper articles gave a list of her cargo which included casks of wine, hops, sugar, many packages for local businesses and cases of chocolate (one wonders how they survived the journey in the heat!) There is almost mention that with good weather the ship managed the journey from Plymouth in England in 77 days.


I also discovered that the Monarch sailed from Melbourne on 5th September 1863 to London so it is feasible to assume that this may be where John Way was returning from, at the beginning of the post.

The Monarch made two voyages to New Zealand the first in 1866 was to Auckland and the second in 1870 bought 200 immigrants to Lyttelton (Christchurch) in New Zealand. No one knows what finally happened to the ship, she sailed from Bombay to Rangoon in 1876 and was never heard of again.

A few years ago I managed to come into contact with a distant cousin and I was delighted to discover that the original painting is still in the family! There were specialist painters who would be commissioned by owners or captains to recreate a picture of their ship. 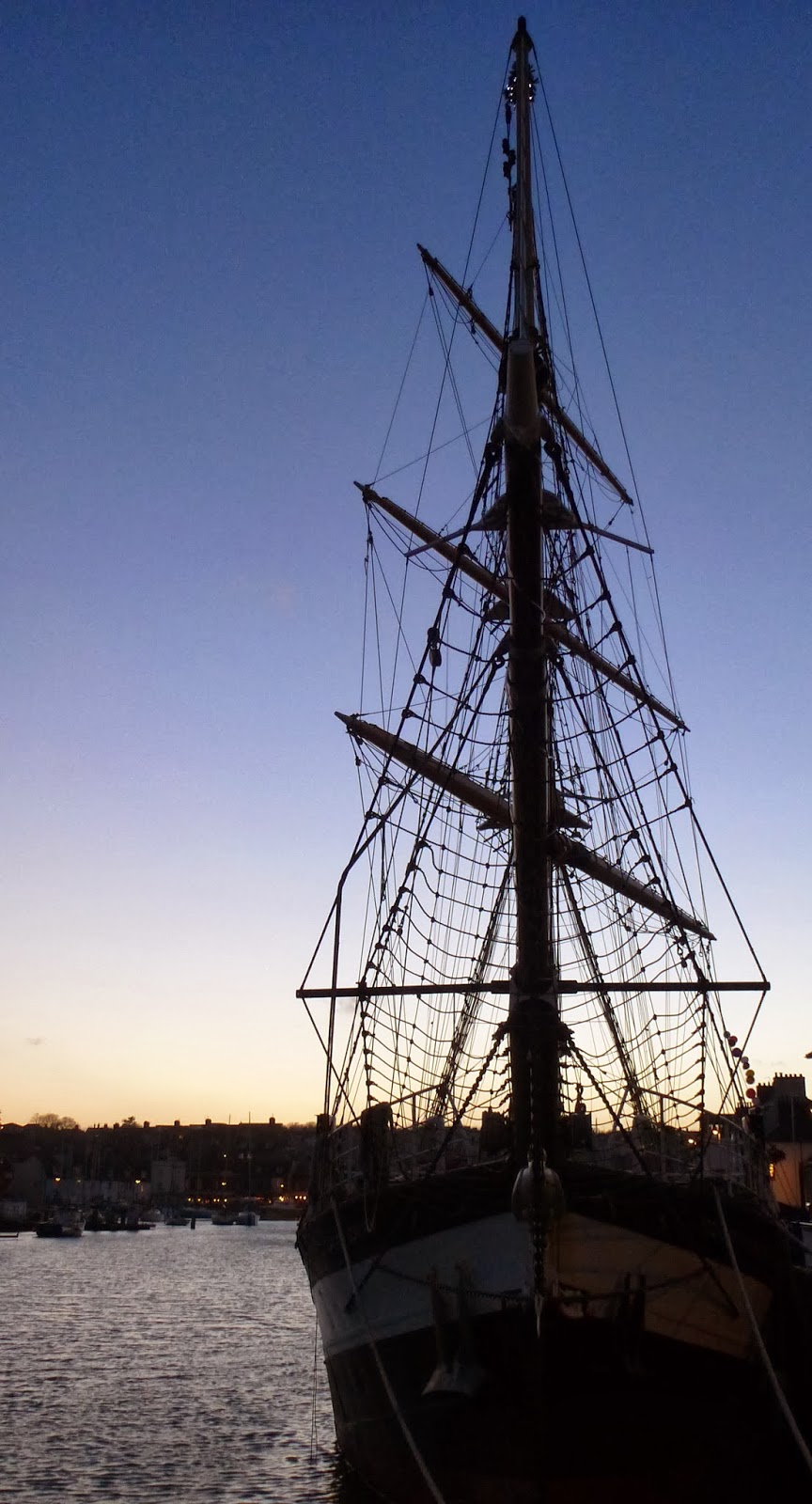 Life on the high seas was not always easy and John Way was captain of other ships too. He went to the rescue of another British ship called the Harriet, off Malay (South East Asia). The captain had been murdered and two of his officers injured by one of his crew. John Way took two of his own men and boarded the ship. The murderer approached them with two knives. He managed to remove one of the knives from him, but following a struggle, he was injured by a wound to his hip and narrowly missed another blow aimed at his heart!  Another time near El Salavador one of his own crew became drunk and grabbbed a knife and threatened the crew. John took a gun and wounded the man. One of his ships  the "Rantipole" was severely damaged in a typhoon in the South China seas before running aground and being refloated near Amoy (Xiamen). The ship was written off. An auction was held for the items that could be retrieved.

John managed to survive all of that excitement and eventually set up a business in Bristol as a merchant supplying the ships instead.  At the age of 58 he became a publican in charge of the Hole in the Wall pub in Bristol. On a visit to Bristol many years ago we choose this pub  to have a meal in, without knowing of this family connection!


I started the post with the story of a baby and I am going to end it with another one! Last weekend my nephew's wife gave birth to a beautiful baby girl, who they have called Lily Anna. How different her life will be compared with her ancestors!

These following links are useful for family history research


Thank you as always for visiting me and  the lovely comments you leave me.Welcome to my new followers Timi, Garten No 7, cirmaraki at verskert, and arquiteturadoimovel. I am always humbled by how many are interested in my ramblings and pictures.  I may not travel by sea to distant lands but it is wonderful to connect with so many, whose lands my ancestors may have visited!