Over this weekend we visited a Sub-tropical garden on the coast nearby at Abbotsbury. It felt as if we had travelled more than 10 miles (16km) from home as we walked among the exotic plants much more common in exotic locations. 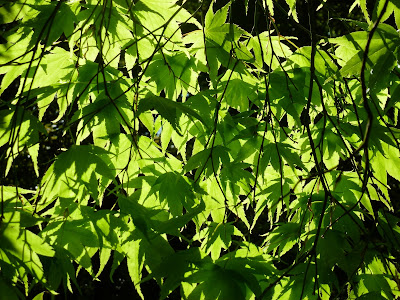 We have been here before, although it is many years since we last visited and we didn't realise until recently that dogs are allowed in. The gardens were established in 1765 as a kitchen garden for the nearby castle (which is no longer here). With its mild climate the Gardens were a popular place to grow the many plants and seeds discovered by plant hunters in the 19th century. Like many large gardens it declined after the two world wars and brambles and thick undergrowth were cleared in the 1960's when the restoration began.

The magnolia walk is new since we last visited and as you climb the hill the view gets better and better.... 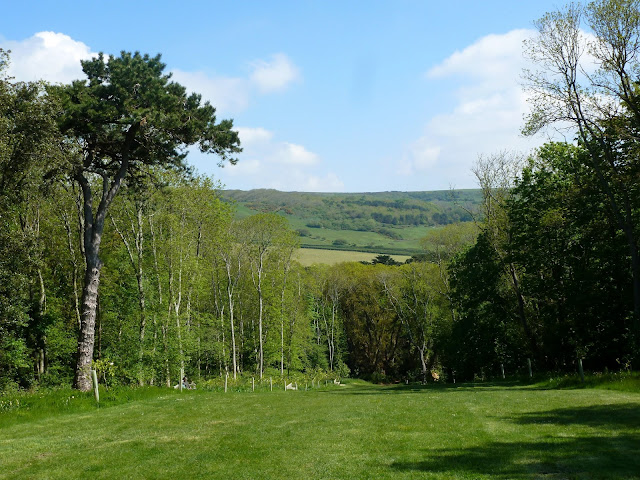 At the very top it opens out into this breathtaking scenery. I could have sat here for hours looking at the sea! 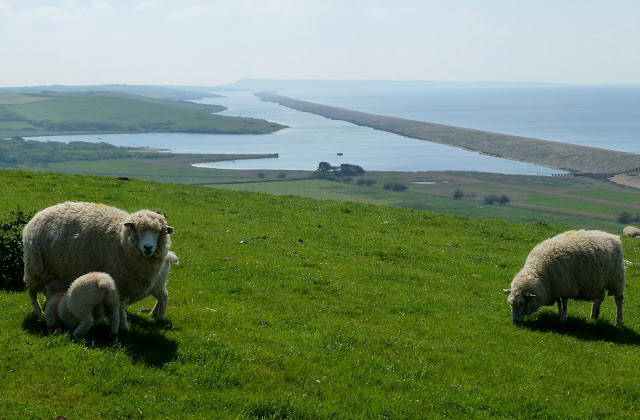 Weymouth and Portland is in the far distance, the bank of shingle is the Chesil beach, and the salt-water lagoon is known as the Fleet. 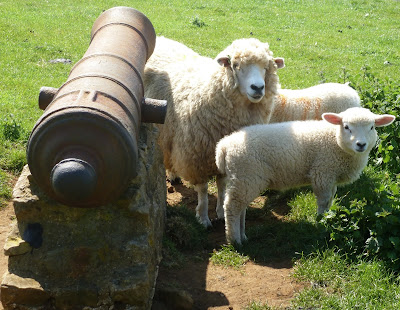 The sheep and lambs were too busy to admire their surroundings! 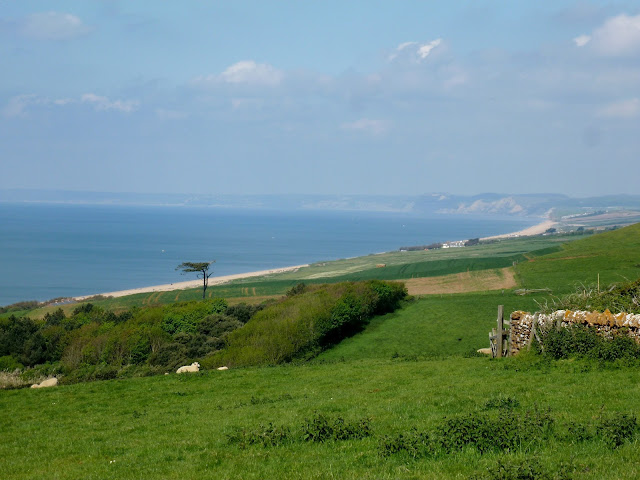 In the other direction is West Bay (Broadchurch) and Lyme Regis. 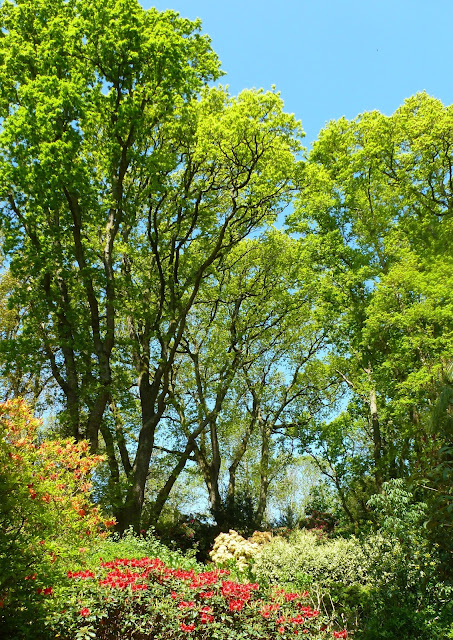 Back in the woodland area of the gardens, azaleas were in full bloom and the trees towered over our heads. 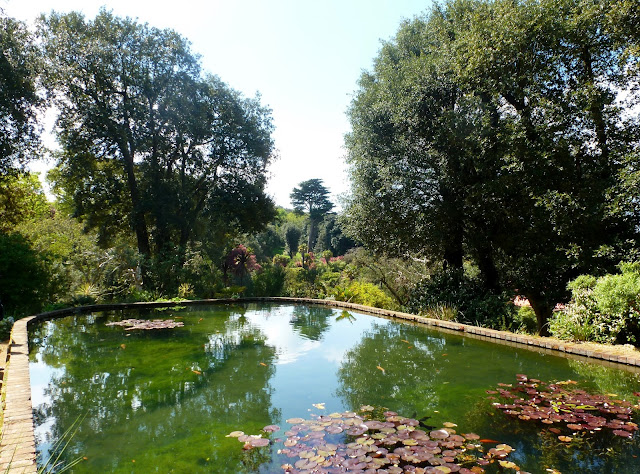 The lily and fish pond with lush trees and undergrowth stretching as far as the eye can see. 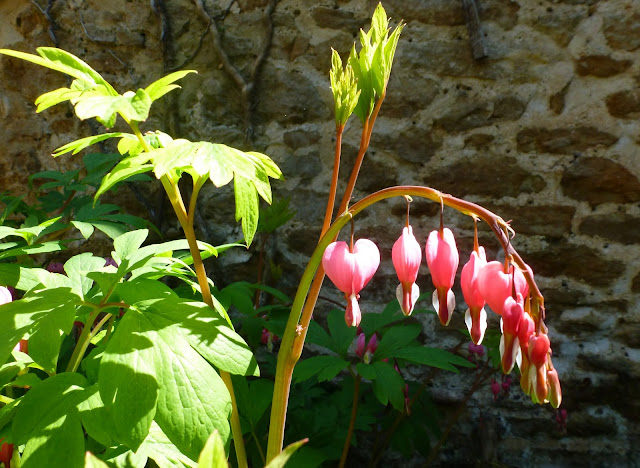 This beautiful bleeding heart plant was thriving in the shade of the walled garden.

This will be the first of many visits we plan to take here and I'm sure you will be invited along too! Sometimes it is so easy to overlook visiting places that are nearby, does this happen to you too?

Have you visited Emma at Emmie and Emma at home ? She is a textile artist and maker and I have admired her work since I first discovered her many, many months ago. I asked her whether she could make me a
Westie felt brooch and this is what she sent me, isn't it lovely? It looks so like Daisy. 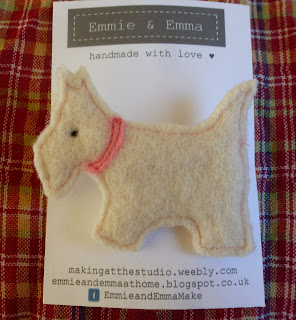 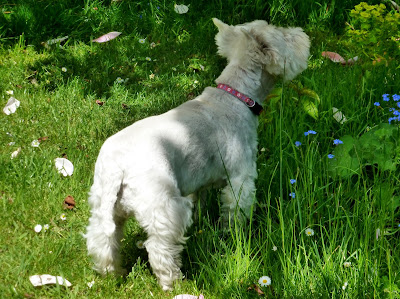 As we were sitting in the garden with a coffee this afternoon a squirrel appeared on the trellis. I wish I had followed Nina's example and had a camera to hand. By the time I had got the camera the squirrel was long gone, but it didn't stop Daisy looking for it! A few weeks ago at lunchtime an adult fox quite casually wandered across the lawn. Twinkle, who is a tiny cat, was in the garden at the time but was luckily fast asleep under the horticultural fleece that was covering some seeds in the vegetable garden. Also, recently, I was having difficulty in getting water out of the rose of a watering can. I took off the rose and gave it a hard shake, assuming it was a snail that was blocking it, and to my surprise out fell a newt ! 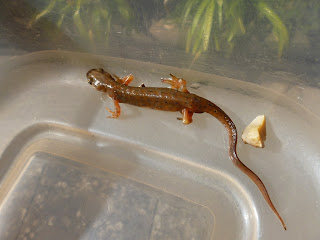 As many of you have noticed I have changed my banner and background I felt like a change! I hope it hasn't confused you! Welcome to my new followers Primroses and Petticoats,  Teresa Maria at An Amateur's ventures on life, Luisa,Angels door, Lilan, Yonks, and Danielle. If you have a link that I haven't added please let me know.

Congratulations to Carolyn from Draffiin Bears who wins my giveaway book by Joanne Harris Peaches for Monsieur Le Cure. from my French link party post Thank you for those who took part I'm sorry you couldn't all be winners.
Sarah x