The home of rope

Rope has been produced in Bridport for the last 800 years. Back as far as 1213 King John exhorted the people of Bridport to make ' night and day as many ropes for ships both large and and as many cables as you can.' The raw material came from the surrounding area, hemp was grown in the sheltered valleys and flax was grown on the slopes. 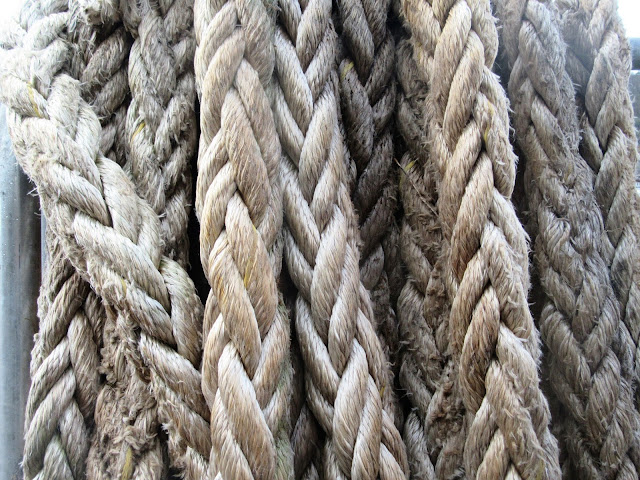 If you look carefully you will see evidence of the rope making industry all around Bridport.  Many of the buildings fronting the main street have a long strip of land behind where the workers would walk up and down. At the far end of these rope walks was a turn house where a jack was hoisted to twist the thread.

The craft of making rope and nets could employ the whole family and neighbouring villages around here would specialise in different sizes of net required to catch different varieties of fish.  Many of the older generation in the town or surrounding villages still remember net making being carried out at home, and there are still a few outworkers even now.

In the 18th century the quality of Bridport lines and nets was well known throughout the world. One of the biggest exports was for the Newfoundland fishing industry. I have been recently reading Rudyard Kipling's book Captain Courageous, although it is a children's book it gives a good description of  the fishermen and fishing fleet off the Grand Banks at that time.

In 1858 there were 14 distinctive firms manufacturing nets, cordage and canvas in Bridport.  It is quite surprising that the town still has a similar number of firms that involved in the rope making industry!

Growing hemp stopped in the late 19th century and following the Second World War the use of natural materials in rope started to decline as synthetic material was introduced. The synthetic material was stronger and lasted longer, although the fishing industry continued to use rope as they couldn't afford to pay the higher prices for the new materials. 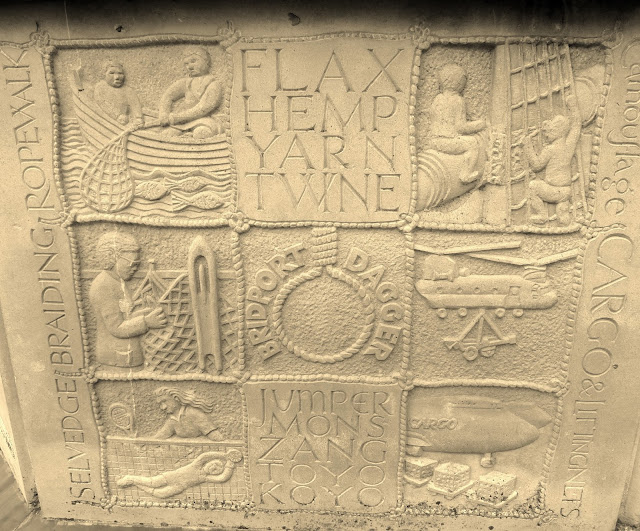 This carving above illustrates the main uses of Bridport rope, net and twine from fishing and ship ropes and cables. tennis nets including those at Wimbledon, football goal nets (1966 World Cup), cricket nets, skipping ropes, gardening, camouflage, used in the aviation industry for cargo pallets net, carrying large loads by helicopter. A more gruesome use of the rope Bridport produced was for the hangman's noose and was often called "The Bridport Dagger." 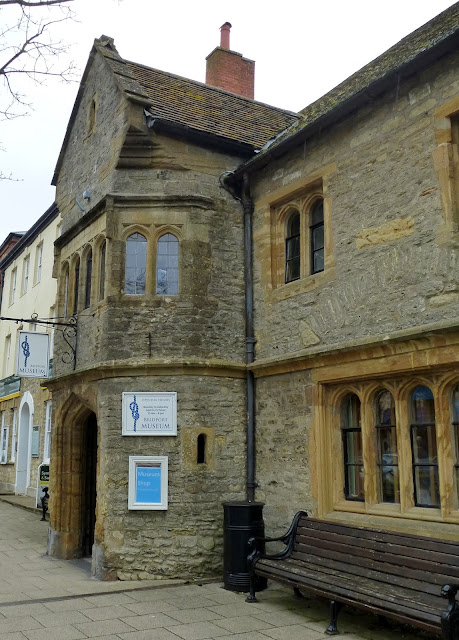 Our local museum is currently closed and is being renovated thanks to National Lottery Money. It's biggest display will be the story of rope making in the town, in a new imaginative way. I have in a very small way as a volunteer been involved in this project over the last year.  You really don't appreciate how much hard work goes on behind the scenes to empty, redesign and reopen a museum! Hopefully it will open at the end of May and I am sure to feature it again then.


Thank you for your comments and visits,until next time.
Sarah x